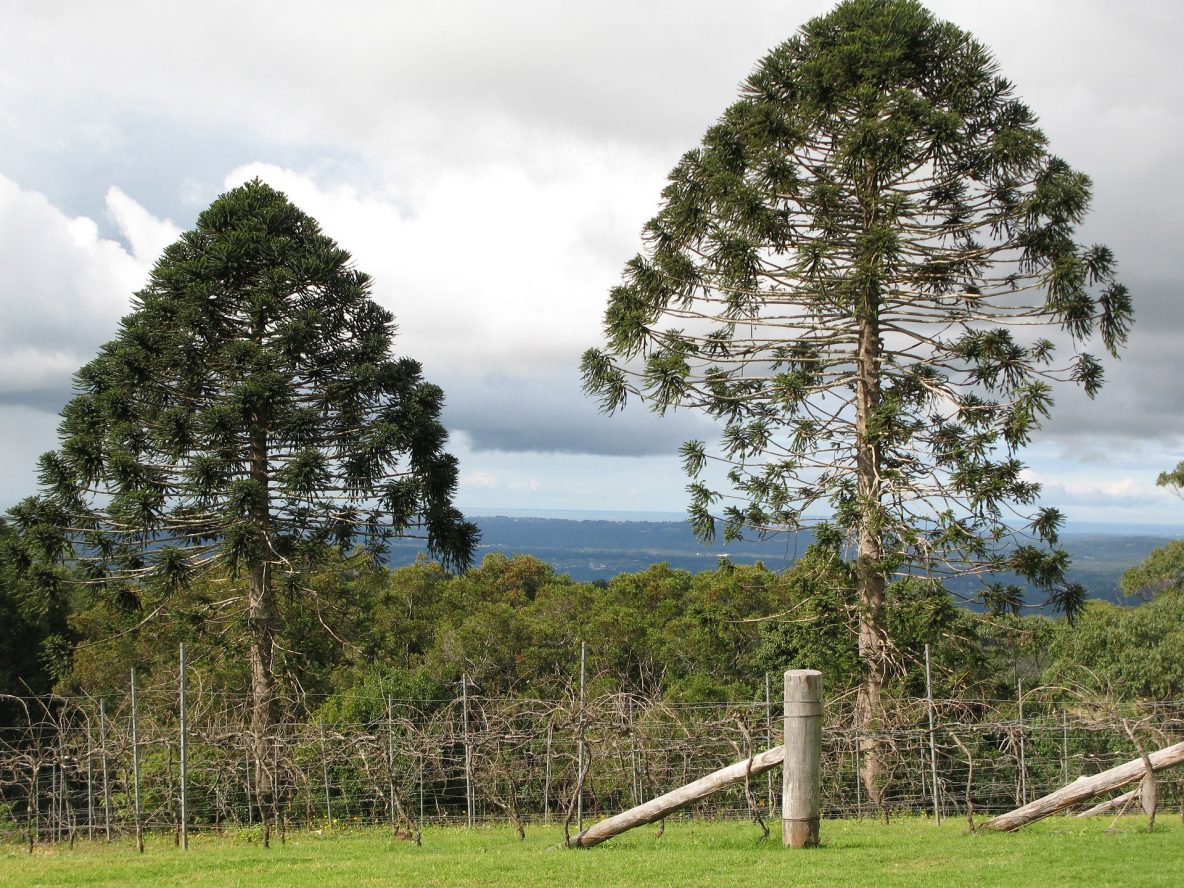 The Bunya pine  (Araucaria bidwillii) is an Australian native plant with large edible nuts.  It is not considered threatened. However, according to the National Arboretum, its active conservation in the wild is important now to protect the sacred values which the indigenous people have for the species, as well as to protect it from potential threats from climate change.

Bunya nuts are the large edible seeds within the cone of the Bunya pine tree. Bunya pines were on earth at the time of the dinosaurs. An individual tree can live for about 600 years. They grow 35-45 metres high and the pine cone can weigh up to 10 kilograms, so you don’t want to be standing under the tree when the pine cones are falling. The Bunya pine has been of great significance to Australian Aboriginal people for thousands of years. Oliver Costello is a Bundjalung man who told Lucy Rennick (for an SBS article in Jan 2018) that “Bunya trees fruit in the summertime, and that’s when clans from remote areas would travel to the Bunya Mountains [in southern Queensland] for ceremonies. The abundance of the seed facilitated massive gatherings, where people would talk lore, marriage and ceremony, and then travel back to their country.”

Traditionally, bunya pine seeds were roasted on an open fire and eaten as they were. “They’re like a massive Brazil nut,” said Costello.

According to the Queensland Parks and Forests website: “Expansion of European settlements, along with increased logging activity and clearing for grazing and farming, disrupted the large gatherings, making it difficult for visiting Aboriginal groups to travel along their traditional pathways. Aboriginal people left or were removed from their country. The last great festival was held in the late 1800s, but the connections still run deep. Local Aboriginal people and even groups that didn’t attend festivals still have ties with the Bunyas through trading, family, songs and stories.”

Jacob Freeman has written an informative article about Bunya nuts for Transition Bondi in which he describes how to prepare the nuts for eating: “The most common way to prepare the nuts (once they’re removed from the cone) is to boil them in their shells for 20 to 30 minutes. This will soften the nut and the outer shell. Take a sharp knife and carefully cut through the shell to reveal the nut. (An incision can be made prior to boiling which makes it easier to cut the shell). Once the boiled nuts are removed from their shells, they are ready to eat or use in pesto, gluten-free pancakes, biscuits, nut slices, or grind into a paste. The cooked nut can also be dried out and ground down into a gluten-free flour, which you can freeze for future use.”

Other sources for this article: