The 2019 Transition Australia Convergence was held on Sunday 15th September in Melbourne with the theme: Networks for Action

It’s no exaggeration to say that we face a crisis. We need to do more than stop emissions, pollution, waste and habitat destruction but also rapidly reverse course to enable developing countries to bring their populations out of poverty. It can be daunting.

In the context of this climate crisis, on 15th September 2019 Transition Australia brought together 130 people at RMIT Storey Hall Melbourne for a day of Networks to Action. Sixty one groups were represented, and many passionate individuals.

Three Foundations of the Convergence

Foundation 1: Nobody has THE answer. That’s not to say that people don’t have answers, but that we need all of the answers working together in synergy to really make this work. A forest made up of a single species of tree is brittle and lifeless, we need an ecosystem of activism and action working together

Foundation 2: People need to see the network but find the node. It’s easy to feel like you are the only one worried about what’s going on, yet see coordinated lobby groups and big business present their existence like a fait accompli. This is completely backwards; there are millions of people spending billions of hours to build a sustainable and just future, but we only tend to see those groups we personally encounter. What we need is to connect so that people don’t see the group… they see the network. But more than that, the network needs to enable individuals to find groups that meet their passion.

Foundation 3: We need to be interdependent not competitive. In this world we struggle for models that aren’t competitive and capitalist. If we are to turn the tide we need to be autonomous but connected, work to our strengths and always remember that it is the outcome that is most important not the organisational vehicle.

By answering these three questions we aimed to produce clear, accountable and actionable statements that face up to the magnitude of the challenge.

Session 1: The Scale of The Problem; The Urgency of the Solution

This session was all about setting the scene. First we came together as a group and honestly acknowledged the scope of our challenge whilst identifying how we will work in challenge but with kindness and hope. This session finished with the provocation for the day:

How can we bring about real change through networked, powerful and visible action from the street to the planet?

For the second session people choose from one of three streams:

In the third session, after lunch, we used a process called Open Space Technology. It involves 4 rules and one law that you might like to check out at https://www.youtube.com/watch?v=M_jhcvCYBbg. It also involves each participant having the passion to have a conversation and taking the responsibility to make it happen.

To prepare for this, throughout the morning there was a marketplace… sort of like a grid which links up spaces and times. If anyone felt there was a conversation they really wanted to have, all they had to do was write the title, question or focus on one of the pieces of paper, write their name on the bottom and then stick it at a time and a place on the grid. Then the conversation became part of the agenda in session 3. So after lunch people gathered in many corners of the building and there was a ‘harvest’ sheet to record where the conversation landed.

Session 4: Big ideas from around Australia

Session four was a Zoom link-up with smaller gatherings that had met for a couple of hours in Penguin, Tas; Mundaring, WA, Adelaide Hills SA, Bondi, NSW; and NW Brisbane, Qld. Each state reported on the big ideas they had come up with. There were some hilarious activities in the 30-second gap between signing off one Zoom connection and starting up the next one.

The final two speakers were Jeff White on Inner Transition ideas and Rev Ali Sangster on how do we find hope.

Throughout the convergence we did our utmost to reduce waste. We paid a bit more for catering to include crockery and cutlery – no disposable anything. We provided compost containers so that there was virtually no landfill waste.

Read on for feedback on the convergence, and scroll down further for photos.

We had some fantastic feedback from the convergence, with some consistent messages coming out. It was great to see the positivity with 92% of respondents identifying the organisation and the speakers as being either good or excellent, we’ve picked out a couple of representative comments to highlight some common themes.
More Time!
“I’m tempted to write: MORE TIME! – but I know that can be a challenge for so many people, so maybe it was ideal as it was. I think this was the best gathering I’ve attended in a very long time, certainly my No 1 in 2019. Well done, and thank you for this!!!”

The sheer amount to get through and the desire for more time was a really common piece of feedback. Lots of respondents wanted more time to engage with groups and individuals more deeply and authentically and we will be busy thinking about forums where we can help this happen.

Seeing strength in diversity and collaboration.
“It successfully encouraged me to remain fully open to the diversity of solutions needed: every person, every idea, every effort is valuable, relevant, and connected”
“At this convergence, there was such an openness towards ideas and messages from across the spectrum – I loved it how the Extinction Rebellion, the climate emergency declaration movement, the climate strikers, permaculture and many other ideas and movements kind of melted into one. Beautiful!”

It was great to hear the affirmation of the idea of Transition being a hub and helping bring together different actions, different views and different groups as a couple of comments beautifully summarised “the magic happens when we all come together and unite”, “collaboration is key to creating meaningful, lasting change”.

Technical, Political and Human.
There were different experiences about the different aspects of change with some people thinking we needed to focus on the human scale to “engage with people to bring their attention to the opportunities to improve health and wellbeing whilst saving the planet? How do we make this compelling?” Others suggested that the technical aspects were surprisingly hard to communicate.

Building agency for change.
Comments that talked to empowerments, agency and a belief that we have the capacity to drive and see real change also featured quite heavily at all levels from local to political.
“I discovered that I do know more than enough to create a huge amount of change. I don’t need to defer to ‘experts'”.

The National Wrap.
Despite technical issues people were really positive about the national wrap up (and even some of the intermission challenges!).

“Connecting with groups from around the country, and seeing the reactions to each proposal. Loved it!”
“We are truly national – and flexible in connecting with like minds”

Thank you to our sponsors:

We are very grateful to the NED Foundation for their support.

Photos from the 2019 Convergence

All photos by Tess Holderness 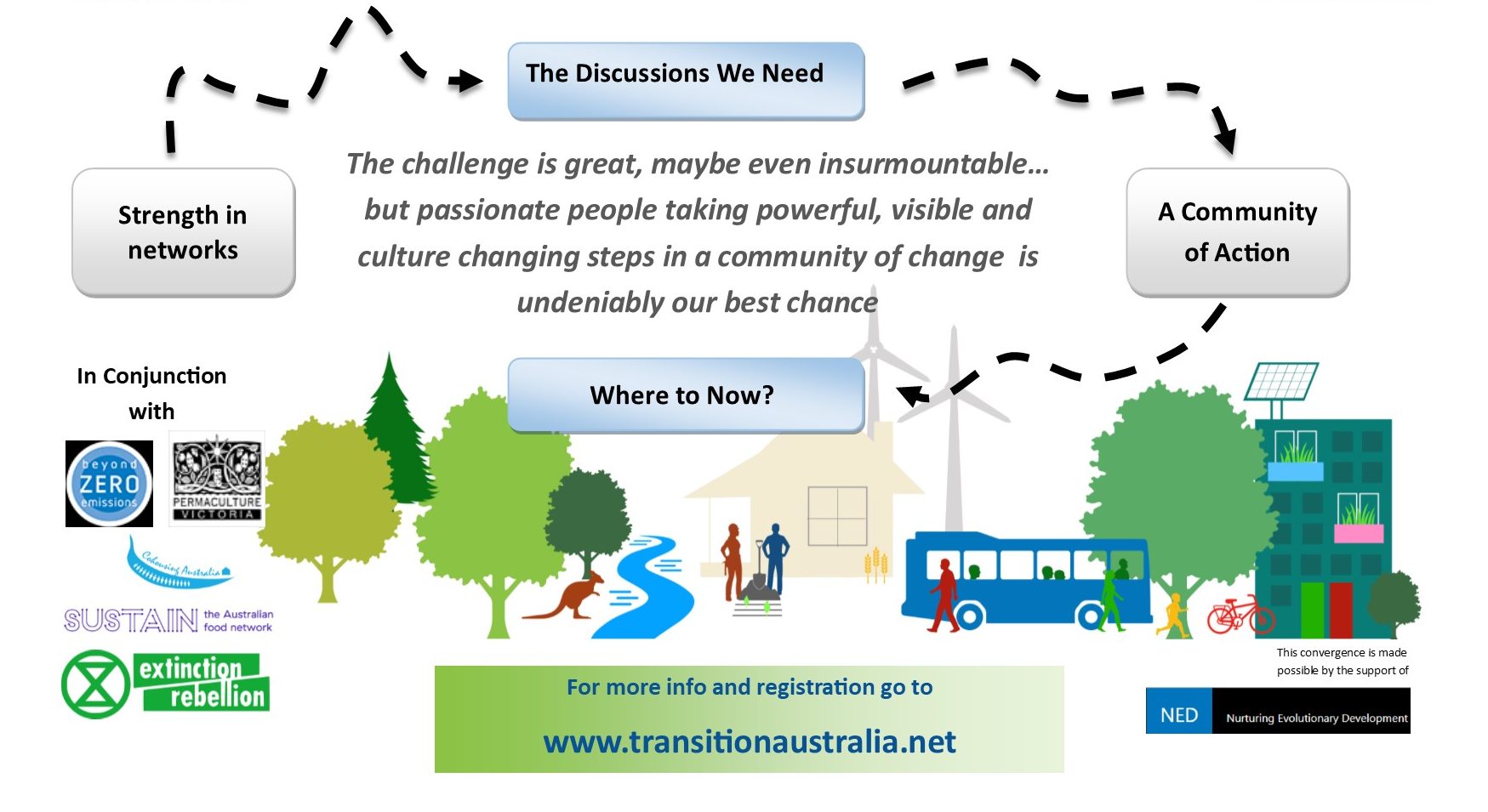