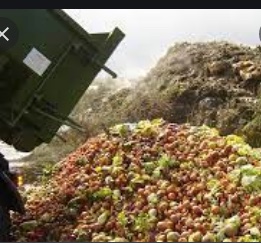 Local Councils push to keep food waste out of landfill .

Councils stretching from the South Australian border to Bendigo have combined to search for the ultimate answer to one of Victoria’s greatest recycling challenges – how to stop thousands of tonnes of food waste going to landfill.

According to Foodbank, 65 per cent of discarded food could have been eaten and Victorians waste more food than any other state or territory – 2.4 million tonnes in 2020

Eight regional councils are offering $120,000 to report on the feasibility of creating an organic processing solution that can be used by these municipalities, one that focusses on the development of a Circular Economy. The project’s objectives include gaining an understanding of the different types of organics processing technologies, and the volumes and types of food waste most suited to them.

Such a system would involve food waste being diverted to organic byproducts such as biofertilisers, bioenergy, methane gas, and electricity production, and for plastic, glass and paper to be recycled to create other products in ways that are environmentally safe.

Victoria has one waste-to-energy ( electricity only ) facility – Wollert in Melbourne’s north, which can produce around 22,000 kWh/day ( around 1300 homes ) with a large part of it’s organic waste coming from the wholesale fruit and vegetable market. Other WtE plants are planned for Lara, near Geelong, and Lilydale, in Melbourne’s Yarra Valley.

The problem with these plants is that they require long-term, locked in contracted, volumes of waste, and they produce toxic by-products if food waste is not included.

The State Government has imposed a 1 million tonne cap, but the Municipal Association of Victoria thinks it would be better policy to strictly control the types of waste going into these plants rather than volumes, with approaches such as waste reduction, reuse and recycling being more environmentally sustainable. 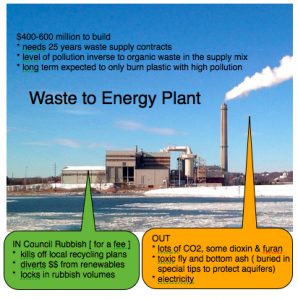