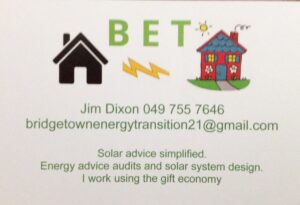 Contact Jim on 049 755 7646 or email bridgetownenergytransition21@gmail.com  to ask for an Energy Audit or to discuss options to move to more sustainable power options.  Jim can provide a host of low cost, simple tips to save energy,  as well as advice on choosing and installing solar panels.

Thanks to our supporters for the questions, to Jim Dixon for answers provided at the Open Space, and to Geoff Bourgault du Coudray  for further comments provided after the event

Q1. Can we have 2nd hand solar panels installed?

Q2. How can we recycle panels and frames?

Q3. Can electric vehicles (EVs) be used to recharge/feed back to your house?

Q4. New Chinese EVs are being touted as cheap and reliable. What is your view on this?

Q5. Can we get solar without the burning of jarrah?

Q6. Are you aware of any companies that are ‘green” end to end?

Q8. If you have small power usage, is it worth installing solar?

Q9. What is going to happen to the grid if more of us are feeding back into the grid?

Q10. Have Albany and Denmark Shires contributed to the costs of installing the wind farms, and why is it more viable there?

Q11. Tell me more about your Energy Audit service– what does it entail, why might it be useful and what does it cost? 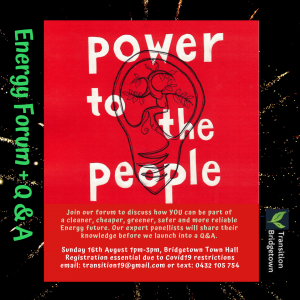