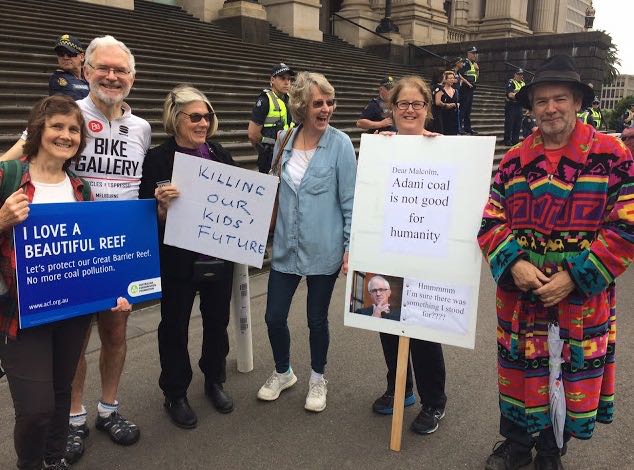 As a committed local climate action group, Lighter Footprints aims to lead and stimulate action that will help to ensure a safe climate future.

This will require a significant change in the attitudes and actions of the community and all levels of government. Activities are focused strongly on engaging with political representatives and members of the public in our area. Lighter Footprint members are also sure to be found at public demonstrations.

Our public forums with invited political and academic speakers have filled the Box Hill Town Hall and Hawthorn Arts Centre. Wanting to spread the word as widely as possible, Lighter Footprints members have been getting letters in support of renewable energy and measures to reduce greenhouse gas emissions published in the local, state and national newspapers. Successes in this endeavour are documented by our ‘Cheerleader’, Malcolm. We work through public interest stalls at local street festivals and farmer’s markets, often inviting people to participate by signing letters to state and federal politicians on topical issues. A successful attraction has been a borrowed demonstration model depicting the principles of solar thermal power generation.

It has thrilled us to see a 150 megawatt concentrated solar thermal (CST) generator with molten salt storage being constructed near Port Augusta to meet South Australian government power requirements around the clock.