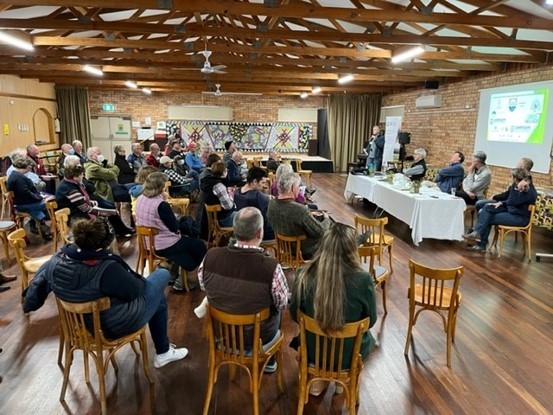 In August 2022 a small conference was hosted by the Clayton Bay Nursery Environment Group which proved to be something quite out of the ordinary.  Not only did the speakers have diverse backgrounds but bared their hearts and souls telling of learnings from failed farming experiences.

Nic Kentish attended Roseworthy Agricultural College and grew up with a heritage of potato growing and beef/sheep raising but could see that traditional farming practices were destroying the soil structure in the long term.  Family debates over many years saw him eventually buy out the farm, go ‘organic’ and the price of potatoes greatly increase but production reduce to less than half.  Working on the issues of maintaining output without degrading the land eventually saw Nic marrying his agronomist and them both becoming consultants, proving the old adage “those who can do, those who can’t teach”. The name of Kentish is synonymous with potato growing in South Australia.

Ben Ryan had everyone spellbound while he told of his lifelong struggle with mental health issues which began with being a poor student, not coping well with boarding school and constant disagreement with his father over land management.  Following his first mental breakdown at 26 he became interested in alternative farming and in 2002 attended an Roseworthy Agricultural College Grazing For Profit school which was life-changing.  He removed chemical fertilisers, selected animals to suit his system, realised modern agriculture is destructive, rejected the advice “just put more on”, recognised that “neat and tidy” is not how Nature works so stopped obsessing about it, learned not to fight Nature but work with it and not to fear change.

Professor Tim Cavagnaro fascinated all with his knowledge of soils and their composition, or rather the tens of billions of bacteria, tens of metres of hyphae and the centimetres of roots, not forgetting the tonne/ha of earthworms which healthy soils should contain.  Dr. Tim Lines, University of Adelaide explained that spraying between rows (of vines/orchards) means that roots, fungi, mycorrhizae, water are missing and these reduce evaporation, compaction and improve water infiltration.  Bare (sprayed) areas between rows can be up to 25C hotter than the same areas, grassed.

Kerry-Anne March and Jeff Edwards of Shingleback Winery, McLaren Vale told how introducing native grasses beneath the vines and planting native vegetation in blocks nearby, predatory spiders and bugs had eliminated the need for chemical use and the work was now being done by five predatory spiders, Lacewings, Ladybirds and other beneficial insects.

Local Carole Richardson talked about the Clayton Bay Nursery started in 1997 and run by volunteers with a paid Manager, and how they have increased their propagation of species from 30 to 150 and are working with many groups to help restore areas not only impacted by the ‘millenium drought of 2007-2009) but many other areas on the Fleurieu Peninsula.

The event was hosted by Clayton Bay Nursery Environment Group and co-sponsored with Alexandrina Council, Goolwa-Wellington LAP, and Landscape SA.  An added bonus was the variety of tubestock plants available for sale of various provenances on the Fleurieu Peninsula.  Attendees came from all over the Fleurieu and were encouraged to seek help from groups and speakers in moving towards farming more sustainably. The conference was small enough to allow informality and big enough for food and wine producers from very different areas to compare and share experiences.